How to interpret the results of your independent inventory report

After you’ve completed at least two inventories in an Independent Inventory category, you’ll receive an email with an inventory report, consumption report, and variance report (if your POS is integrated with WISK).

The inventory report is included for your records, but the consumption and variance will be the main focus for identifying any potential issues.

The consumption report is a good way to compare your inventory counts and see the value of what was consumed between your independent inventories. If your POS isn’t integrated, you can still compare the consumption to the sales from your POS manually.

The variance report builds on the consumption report, by including the sales data between the independent inventories.

Note: If your venue is sending sales via a daily sales report email, complete your closing inventory after the sales data is sent to WISK to receive a variance report. For more information, see “Daily Sales Report” in this article.

On the variance report, you can see how much was sold of each item, based on the recipes you’ve added in the POS Items section. Please make sure there are no unmapped POS Items that contain items you’re tracking in the independent inventory, and that your mapping is accurate. Otherwise, your sales values won’t be accurate.

This sales data is then compared to your consumption, to produce a variance.

In this example, our venue has been taking a weekly inventory for the last month, and have noticed a consistent variance with our Jameson, Absolut Vodka, and Grey Goose Vodka.

By taking independent inventories of those items before the bar opens two nights in a row, we can pinpoint where the variance is coming from.

After completing those inventories, we’ll receive a variance report.

On the summary page, you'll see your overall variance, variance by family, and variance by category. 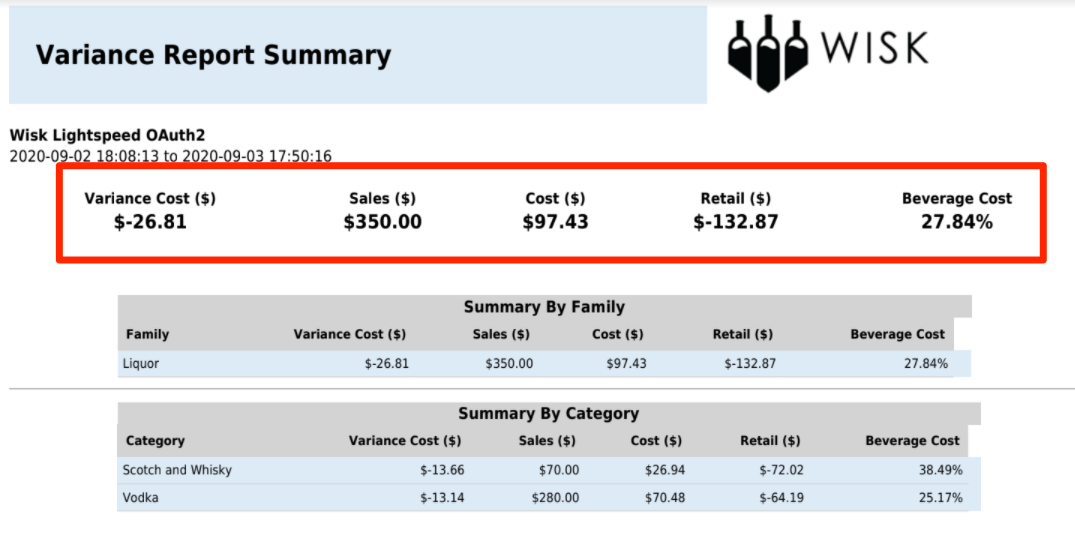 In the screenshot above, it shows the:

Variance Cost = Cost per Unit * Variance. A negative Variance Cost indicates a loss. In this case, it’s $-26.81. It means we used more product than we should’ve based on the recipes we’ve added. You want your Variance Cost to be as close to $0 as possible.

Sales - Total sales for the items during the time period (based on POS Item Mapping). In this case, we had sales of $350.00 for the tracked items.

Cost - The cost of goods consumed. This is the value of how much was consumed at cost based on the opening and closing inventory counts. In this case, it’s $97.43.

Retail - The theoretical value that the Variance Cost would have sold for based on your POS Item recipes. In other words, the $-26.81 worth of product would have translated to $132.87 in sales. It is shown as a negative value because it is a theoretical loss.

What does it all mean? At a high level, we’re losing out on profits because we’re consuming more product than we should be, based on the recipes we’ve entered into the system.

When we look at the Summary by Category, we can start to drill down and see where these losses are coming from:

For both Scotch and Whisky and Vodka, there is a negative Variance Cost, indicating a loss.

This means that consumption was higher than the amount that should’ve been sold.

Looking at the Scotch and Whisky, the beverage cost is very high at 38.49%. The “ideal” beverage cost can vary depending on your market, but for liquor, anywhere between 15-20% is a good place to be.

For Jameson, it shows that during the period between independent inventories, we consumed 0.8 units, but only sold 0.4 units. This shows that there was potentially some over pouring or spillage in this period, or items were being poured but not being entered in the POS. This amounts to a variance of 10.29oz.

For the Absolut, it shows that 1.2 units were sold, but only 0.6 units were consumed. This is actually showing a positive variance, that less was used than sold.

However, when we look at the Grey Goose, we see that 0.6 units were sold, but 1.2 were consumed. In this case, it’s possible there were instances that Absolut was being punched in the POS, but Grey Goose was being poured instead.

As mentioned earlier, you need to make sure that your POS Item / Recipe mapping is correct, and that you’re not missing any sales data to confirm these numbers are accurate.

Note: To verify the sales data, you can go to Sales > Sales on the WISK Web Portal and enter the time range of the independent inventory by using “Custom range”.

If the data is correct, then it is possible this is a staff-related issue and can be addressed by your venue’s management.